In January 2017 I was married under a perfect New York City sky, on a crisp, unseasonably warm, but chilly January day. But while the air had a chill, I didn’t notice. My body was radiating heat, and love, somehow making me impervious to the winter weather. On that morning, I was getting ready to marry, not just my cliche ‘best friend’ but my partner in crime, partner in concerts, horror movies, and seemingly destined life match. While I can take credit for holding onto, and creating that symbiotic relationship, I cannot take credit for discovering it. In a city filled with hopeful singles, the honor goes directly to Match.com. The online dating site is not only the world’s largest relationship site, but it also touts having the most marriages to come from its service, even in a time when swiping to find love has reached a fever pitch.

Before the days of fast dating sites existed, and shortly after a long, intense relationship ended, my real love story began. Some love stories begin with an early, drunken night together. The ‘one too many drinks’ date which starts as calming nerves, and ends with a lifelong story, (or regrettable tale). Or the chat that turns into an all-nighter. My story began on an evening home alone with a bottle of wine. A night that would begin terribly, but unbeknownst to me turn out to be one of the most important of my life.

It started with several hours of crying over a breakup earlier that day. Followed by ingesting large quantities of Pinot Grigio. Somehow, I found myself in bed, under the covers, laptop above me. Endless thoughts consumed my head and I found myself clicking on Match.com. This is for fun, I told my sloppy self. Not a man, not a marriage, just a fun distraction. But as condescending as it always sounds from those who’ve experienced it, love truly does come when you’re not searching for it. Although technically, by logging on to Match, one can argue I was, in fact, keeping an eye out for it.

That One Perfect Person For You

I’d only become single hours before and never pegged myself as a girl who couldn’t be alone. Yet, at that moment, solitude terrified me. At best, I’d have some new experiences to talk about, maybe even funny dating stories. The idea that I would or could ever meet anyone to share my life with was the furthest thing from my mind. Even though, by that time, online dating had lost its secretive nature, and become fully ubiquitous. Yet, not yet the meet market, swiping phenomenon it’s become today.

The next morning I awoke to find myself fully clothed under my covers, laptop almost dangling off the bed. I felt like I’d just had a one-night stand with myself, as I tried to piece together events from the evening before. Until I logged back onto my computer and found myself face to face with a three-month Match subscription and a hundred new emails filling my inbox. I skimmed my profile and pictures, which I didn’t even remember uploading or writing, yet, here it was. What had I done?? As I made my usual morning coffee, I curiously perused the emails. I mean they were there, might as well, right? In today’s dating world communicating over email with potential suitors may seem pretty archaic. But in 2012, (really not that long ago), it was normal. Not just normal, but a potentially large indicator of what you were getting yourself into. The deeper and better the convo, the higher the ironic likelihood you wouldn’t actually connect in real life. (Which turns out, in hindsight, makes a lot of sense.)

Based on sheer volume alone, I decided there would have to be some kind of elimination process if I was really going to do this. Some formula mixing looks with wittiness. But after finishing my coffee, and over half the responses, I realized finding a good match was no different, or easier than finding a good date in real life. The challenge to extract that one perfect person for you is there both on screen and off. And a dating site can lead us to water, but once we’re there, it can’t make us drink, that’s up to each individual.

His Sweet, Simple Nature and Smile

I felt like Goldilocks, sifting through my filters, remembering the traits we tell ourselves are necessary. A few hours prior I hadn’t even remembered saying those words. But now, after obsessing for half the day I was on somehow on a mission to accomplish something. Even if the number of awful emails was deflating. I almost put it all away and pressed delete account, but something told me to just finish sifting through the emails I’d received. It could have been fate, or maybe just the fact that I wanted to go out to dinner. Either way, it was one of those life-changing decisions we never know we’re inside, but reflect upon later.

In those final emails was a note from a guy named John. He didn’t look like my typical type, nor did his profile say anything particularly interesting or funny. I was a Scorpio, and a little more intense. Apparently, something I’d also agreed with while intoxicated since I’d written it in my profile. But this profile was simpler. ‘I’m an Irish Italian dude, living in Manhattan and from Long Island, let’s get drinks!’ As a writer, words, and banter are like an aphrodisiac. But his to the point prose wasn’t exactly making me swoon. Yet, something about his sweet, simple nature and smile told me to change patterns, and give the nice guy a chance.

The following week, we scheduled a date. There was no back and forth email banter leading up to the date. In fact, him and I never spoke on the phone before we met, and barely text. We didn’t have any up all night chat like in the movies. But he did plan the date and told me to meet him at Gramercy Tavern, a pretty nice restaurant nearby. This take-charge initiative mixed with clear research of restaurants in nearby proximity immediately intrigued me.

Vowing to Love Each Other Forever

On a cold Thursday night in New York City, I headed out to Gramercy Tavern to meet John from Long Island. The very first online date I’d set up, and pretty much the only person I’d conversed with since randomly, and drunkenly joining the dating site earlier that week. But like most things meant to be, timing, and perhaps destiny was on our side. Although it wasn’t love at first site. In fact, at first, I wasn’t sure about a ‘nice guy’. It all felt too easy, something that was new to me, and therefore, terrifying. But I told myself to stop self-sabotaging and just go with the flow. A week after, we set up our second date. After some bites and drinks, we headed to the top of the Empire State Building in that spontaneous way you do things when you’re first dating. When we asked a tourist to take our picture, she told us to kiss. I hesitated. After some coaxing, I gave in, and that would be our first kiss, thanks to the Australian tourist.

Four years later to the day, we returned to the same spot. As I looked out to the city, it still shined just as brightly as that first night, still brimming with possibility. On this night, something else shined brightly too. I took my left hand, now home to my new engagement ring, and grabbed his as we looked out into the future.

With Central Park as our backdrop, we were married a year later. Two people living on the same small island that five years prior didn’t even know each other. They stood atop the Empire State Building as strangers but now they were standing in front of each other, vowing to love each other forever. No matter what your story is, life can always surprise you in ways you never imagined. All you have to do is pay attention.That’s how after stumbling onto a dating site, I found the love of my life after one click.

I thought about reaching out to Match.com to try and get a refund for the overeager subscription that was now unnecessary, but I decided not to. After all, the extra expense was worth every penny. 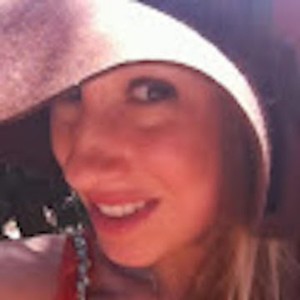